What is the 25th Island of Greece?

by Henry James
in Travel
0

Greece is a country that is mostly a combination of small and large Islands. There are thousands of Islands that come in the premises of Greece. And this article will tell you about the 25th Island of Greece.

The numerous islands of Greece are named and numbered according to their size in the area. For instance, the 1st and largest Island of Greece is Crete, which covers an area of 8,336 square kilometres. It is also the most populous island of Greece consisting of around 634,930 people as studied at the census held in 2019.

Which is the 25th Island of Greece?

The island of Greece is divided or grouped into clusters and these clusters are named differently according to their position on the sea and geographical location. Some examples of the clusters are the Argo-Saronic Islands in the Saronic Gulf, the Cyclades occupying the central part of the Aegean Sea, the Sporades having a small tight group off the coast of Euboea and many more.

Cluster of The Cyclades

The Cyclades includes about 220 islands, consisting of both major and minor islands. Some major islands namely are; Amorgos, Delos, Andros, Ios, Kea, Kimolos and some minor islands of the Cyclades are Donousa, Eschati, Gyaros, Irakleia, Rineia, Schoinousa. Most of the smaller island still remains uninhabited.

The name ‘Cyclades’ refers to a term meaning ‘circular island’. This term expertly describes the geographical structure of the cluster Cyclades, which forms a rough circle of islands around the sacred island of Delos.

The Island of Amorgos 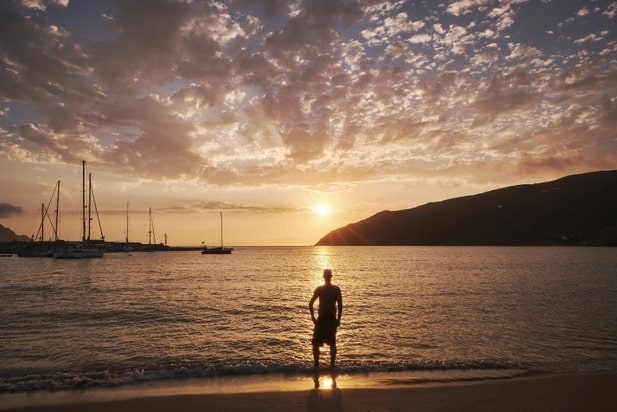 The island of Amorgos is the 25th island according to its size. It covers an area of 126.346 square kilometres. It is surrounded by 16 small islets. Due to its position near the Ionian towns, Amorgos serves as a path from the Cyclades leading to the Greece mainland.

This island consists of several small and beautiful villages with a breath-taking view of the ocean. The climate in this region remains fairly moderate throughout the year.

The geographical location of the island prevents mass tourism as Amorgos is only accessible through the water. But still, there are three locations that are frequented by tourists, Katapola, Aegiali and Chora.

Chora is the capital of Amorgos. It stands tall near the centre of the island at an altitude of 350 meters, (1,148 feet). The village has small houses with narrow alleys and passages. An interesting tourist spot is a Castle that is situated on the outskirts of the village. The Castle was built in the 13th century and is now being used as a tourist attraction.

What is the Hype About 25th Island of Greece?

Scrolling through many social media platforms you must have come across one or another post mentioning the ‘25th island of Greece’. This term has recently been very trending on social media and has also become a meme. But what is the hype about the Island?

When you search the term that is circulating the internet ‘25th island of Greece’, you get the answer in the name of the island, that is Amorgos.

Amorgos or Among Us

‘Among Us’ is a very popular and trending online game with a space theme. Millions of kids around the globe are being slaves to its addiction. The game is developed by an American game and software studio called Innersloth.

To be honest, the game is very interesting and follows a new type of venture of finding ‘Imposter’ among the players. And if you fail to find the imposter, then it may result badly for you. Among Us follows the theme of space and players are depicted as the cutest version of small astronauts, and the avatar is also customizable with some very funny templates.

Among Us is certainly worth a try and the hype surrounding its name is not to be taken falsely.